Spanish
PLEASE NOTE: DUE TO HIGH DEMAND NEW ORDERS FOR JOCKEY AND STABILISERS WILL BE APPROX 16-20 WEEK WAIT

Home » How it started

BOS Jockey wheels, is the first in the world to have designed and patented a geared Drilled operated jockey unit.

Developed in Australia in Feb 2013 after a conversation with a caravan owner who was distraught with his standard jockey unit supplied with the caravan In the words of this customer “the unit was not long enough and was in a location that enabled the possibility of crushing your knuckles on the gas bottles”.

And so the questions we at BOS Jockey raised to him were; What about an electrical jockey unit that is battery operated? and how do you make a battery operated jockey unit? With a drill – everyone has a drill, but you need a long lasting battery with a one to one ratio. And so the idea for gearbox design on top of a jockey unit was born.

Once designed and tested, we filed for a patent which was granted in December 2013, Having done a couple of shows in that year the response and reception was unbelievable. It was here we started to understand the problem people where having with the standard units.

With the gearbox design we found out that people were able to wind their vans up with just a handle and with no effort or strain which in our field research had mass appeal the elderly and the grey nomad movement, all because of the gear reduction. 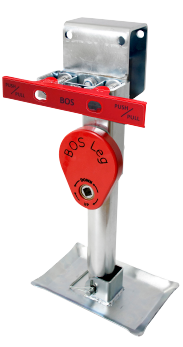 Having made the jockey unit great again and easy to use, we then listened to the problem people are having with leveling their van and having to use a jack. So we designed the BOS stabiliser legs. With a patented Push/Pull handle and the internal gearbox design strong enough to lift your van off the ground using a drill. Again a world first and consistent with our ease of use.

So we considered the option of using the gearbox design on a mover to be able to maneuver your van in a tight spot at home with the use of a drill and so the Econo-mover innovation concept was born.

BOS Jockey Wheels is 100% family owned and operated. With patents world wide we also are the only one offering 5 year warranty on all our products, we design, manufacture and assemble all our products.

PLEASE NOTE: DUE TO HIGH DEMAND  NEW ORDERS FOR JOCKEY UNITS AND STABILISERS WILL BE APPROX 16-20 WEEK WAIT Dismiss